Keegan's is a sentimental favorite of mine and one I've been visiting with fluctuating regularity (depending on how far from the beach I happen to be living at any given time) since I moved to Florida in 1989.  It's an unassuming little hole in the wall, abounding with beach kitsch, located in an equally nondescript tiny strip mall right across the street from the Gulf of Mexico. Prices are low, but the creativity and quality of the menu offerings far exceed that of most of Keegan's tourist-trap neighbors on the Pinellas beaches.  Maybe that's why these guys have withstood the test of time while so many others have not.

Feeling the need for a beach fix, I sweet-talked UD into hauling me across the pond for a late lunch and some Keegan's comfort fare.  I felt really nostalgic sliding into our booth, as little has changed over the past 22 years.  The same chalkboard menu with the ever-changing daily specials was still high on the back wall...right next to the autographed Guy Fieri poster (but that's newer and a story I'll get to later in the post). 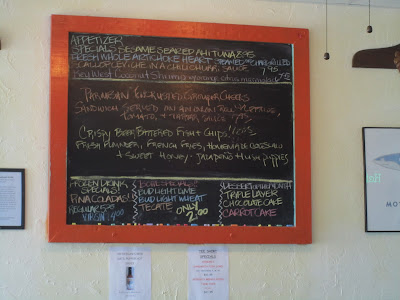 We had already ready decided to dine tapas-style on some of the outstanding appetizers Keegan's offers, but couldn't find a good reason not to share a taste or two of the she-crab soup while we waited for them to come out.  It was outstanding...creamy and thick (but not floury or overly-thickened), laden with crab bits and flecked with tiny roe.  In retrospect, I think we should've gone with a bowl instead of a cup, honey. 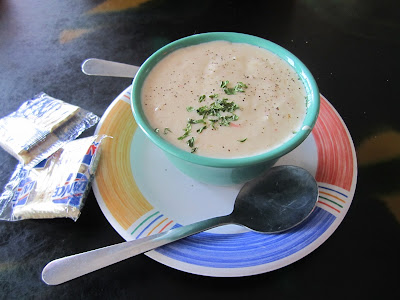 First up, Shrimp Leones. The shrimp were ethereally bathed in the lightest possible of parmesan crusts, fried to golden perfection and served with a spicy aoli that had just enough heat to complement the sweet freshness of these beauties.  Eight HUGE, perfectly prepared shrimp for under $8 is pretty rare around these parts...especially on the beaches. 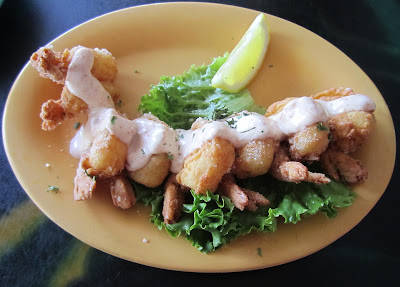 I'm a sucker for Cracked Conch which is not as easy to find in Florida as one might expect (at least not outside of the Keys), and Keegan's also does this one right.  The conch meat is pounded into a level of tenderness that is unexpected in this dish, deep-fried in a light, crispy batter and served with lime mayo.  A massive pile of it arrived, also for under $8.  Not a morsel remained when the plate was removed. 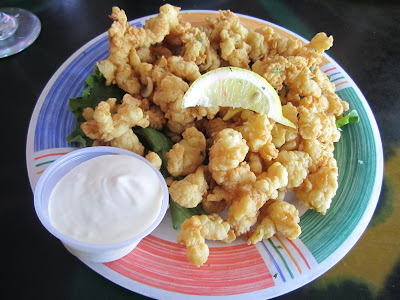 Keegan's serves up some of the best Oysters Rockefeller I've ever eaten anywhere, so it's always a foregone conclusion that I will have them.  As usual, they were spectacular.  The oysters were exceptionally large and blanketed with fresh spinach, a hint of bacon and a golden-brown, melted cheese topper. There might've been a drizzle of hollandaise under there as well.  I used to know someone who would routinely order this appetizer when he visited Keegan's, eat his dinner and then order a second serving for dessert.  That's how fine they are.  Coveting my oysters as I was, I could only bring myself to let Underdog have one...which I thought was pretty damn generous of me under the circumstances.  Oh, and again...under $8. 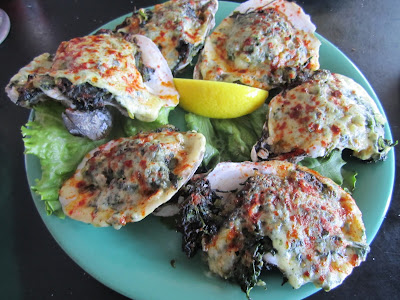 Our "high-end" item of the meal was the $9.95 Char Broiled Octopus (which is cooked and steeped in garlic, wine and herbs, then finished on top of a lava rock flame). While it was delicious and had a flavor and texture somewhat reminscent of lobster tail, the visual gave me a bit of a tough time.  Being the carnivorous hypocrite that I am, I do better when my meat doesn't so much resemble what the animal looked like when it was still roaming the earth (or ocean).  Fried calamari rings...YUMMO!  Tiny, baby whole fried calamari with little tentacles still intact...OH, NO!  I prefer to live in a fantasy world where meat products never involve killing but are simply created in a factory and delivered to my local grocer's shelf...not unlike canned corn and potato chips.  And, yes...I know that's wrong.  Nonetheless, the fully intact arm section of this intelligent cephalopod (complete with suction cups) who died for no other reason than to be put on my lunch plate definitely put me on a little guilt trip, so I could only eat a bite or two. 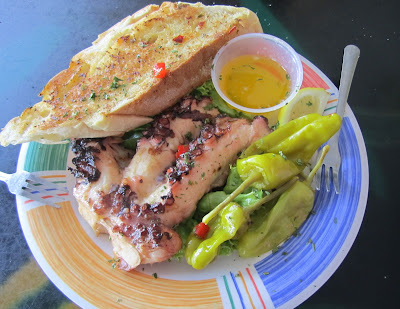 Underdog, who never flinches from tearing heads or ripping limbs off of his food, deemed it a close second to the best grilled octopus he's ever had (which was at Estia in Philadelphia, where the meat is mercifully suction cup-free and sliced into little unrecognizable, caramelized disks so even I can enjoy it).  "So glad I don't suffer your angst.  *urp*  Have I told you lately that you're batcrapcrazy?" 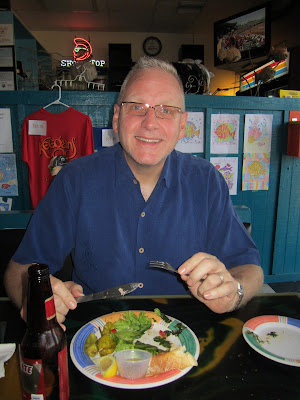 As a side note, Guy Fieri (not that I'm a fan, but it's still kinda cool) featured Keegan's Char Broiled Octopus on one of his episodes of Diners, Drive-Ins and Dives a few years back.  To view the video, click here.

Moving on...THIS is what I'm talkin' about!  The best pie on the planet...Keegan's Chocolate Bourbon Pecan Pie.  *thud*  It was to die for...crammed with pecans and without the over-the-top sweetness you get with many pecan pies...and then there's that crust.  We're not sure chocolate, bourbon and toasted pecans wouldn't be almost as amazing served atop railroad ties, but the crust ratcheted this dessert to an even higher plane.  It was thick, tender, flaky, beautifully fluted around the edges and clearly hand-made with love.  Having hopelessly fallen for the creator of this masterpiece, I asked our wonderful server, Jennie, to bring him to me so I could ask for his hand in marriage. ;)  Okay...he was young enough that I didn't want to feel like a creepy old cougar (not to mention the fact that I had the spousal unit with me) so I simply complimented him on his fabulous pastry and called it a day.  This was a perfect slab of heaven. 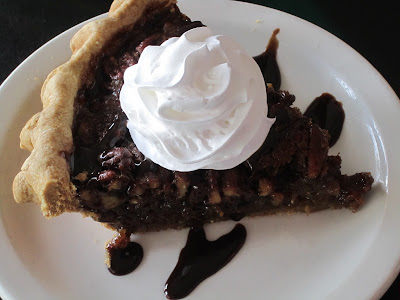 Yes, it was a good day! We had all of this, plus two bottles of beer and three glasses of lower-end Chardonnay for $68 before tip.  BTW...do I have spinach in my teeth?

Posted by Denise Parker at 7:29 PM

Email ThisBlogThis!Share to TwitterShare to FacebookShare to Pinterest
Labels: Seafood