I'm always bitching about the dearth of decent dining choices in Brandon, but maybe I haven't been looking closely enough.  Possibly even overlooking hidden gems residing right under my nose. As a woman who's too vain to put on her bifocals, I'm willing to admit that.

After a full day of shopping together for home furnishings in Brandon, dragging UD through the likes of Stein Mart, Tuesday Morning, Big Lots, Rooms to Go and Macy's (I know...somebody draw up the divorce papers), all the while giving his American Express card an Iron Man Decathlon workout, I could tell by his hopeless, vacant gaze that if  I didn't get food and alcohol down him soon he'd either be running into traffic on SR 60 or tossing himself into the Alafia River.  Not willing to drive the Crosstown into Tampa on a bet with the RNC in full swing, what was I to do here in the barren culinary wasteland of Cheesecake Factory and Olive Garden?  We love Cuban food and had passed La Septima on many occasions, but its dated strip mall location never did much to inspire a stop.  Desperate times call for desperate measures, however, so it was time to pull in.

I was pleasantly surprised when we entered, having expected a far less cozy and inviting interior.  It had a homey warmth with neither the sterility or utilitarianism I was kind of expecting.  There was even a full bar...Honey, I'm home!

Our charming and efficient server, "G", gave us wonderful, attentive care...far surpassing the level of service we've received anywhere else in East Hillsborough County (Della's After Dark being the only other contender).  A fantastic carafe of autentico red sangria appeared at warp speed, serving as UD's magic carpet ride back from the dark side.  I was particularly enamored of the cinnamon sugar rimmed glasses...nice touch! 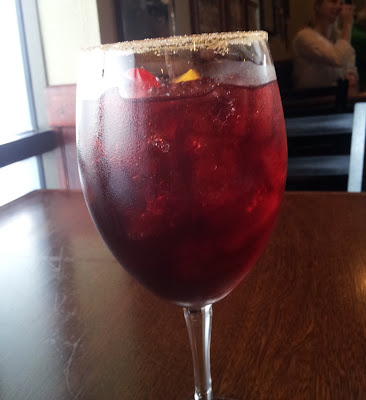 Underdog's Super Energy Pill arrived in the form of  "Walk Around La Septima"...a hearty combo of  Ropa Vieja (shredded tender flank steak slow simmered in a burgundy wine sauce), Picadillo (ground beef, olives and capers in a seasoned tomato sauce) and Lechon Asado (fresh pork marinated in sour orange mojo and slow-roasted to perfect tenderness).  All of the protein offerings tasted like they'd been simmering/marinating/macerating/whatever since God was a child.  SO delish.  I truly adored the mammoth side of saffron-intense yellow rice and black beans, as well.  Nobody poured these beans out of a Goya can.  They had clearly bean soaked and simmered with love.  I couldn't keep my fork out of them. 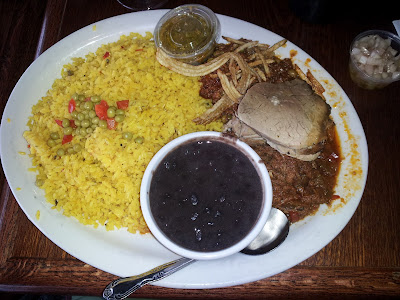 My hot, pressed half Cuban sandwich was a fine, generous and meaty rendition...nothing more or less than expected.  Served with a cup of Caldo Gallego soup (a white bean soup with ham and chorizo) and more Cuban bread, this was the deal of the century for $5.50. 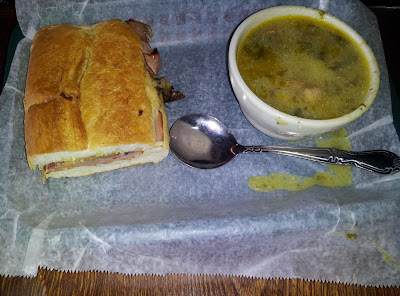 As wine and beer drinkers, we rarely walk away from a nice lunch for less than $50. This one cost about $40 before tip...and we could've easily paid under $20 if not for our carafe of sangria.  A lovely, economical, relaxing and delicious experience all around.  Muy rico!

Posted by Denise Parker at 8:02 PM