Frenchy's Original Cafe, not to be confused with its more tourist-oriented offshoots (like Rockaway), is a bona fide Clearwater Beach institution.  This little hole in the wall was first introduced to me by my supercilious, temperamental and generally bastardly ex-spouse, but at least he was good for something.  It's withstood the test of beach resto time, having been in business since 1981 (with my initial sampling circa 1990-ish...long before I could legally enjoy a pitcher of beer).

When I returned today after many years away, it was like stepping back in time. Same photos on the wall, same fish tank, same bar, same cute and friendly waitstaff and basically same short-but-sweet menu (although it's slightly more extensive than it was 20 years ago). This is a place you go when you need to get your second wind after a day of beaching or boating with cold beer and some serious protein-and-carb-laden goodness.  Hello, my Precious! 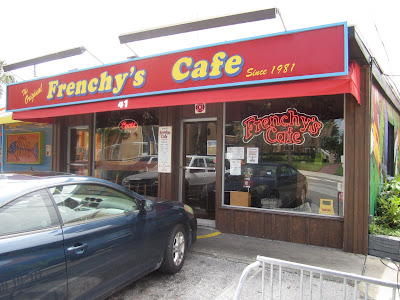 I do like the newer kitschy outdoor seating. Who could resist this? Okay, maybe I'm the only one who couldn't...but it IS my blog. 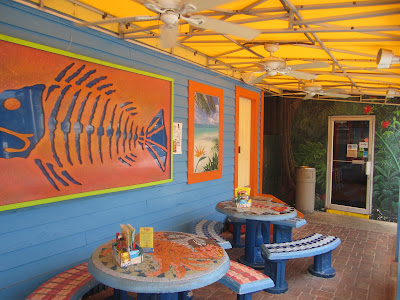 Frenchy's Smoked Fish Spread sets the bar on the Pinellas coast as far as I'm concerned.  I don't know what fish they use and I don't care.  Always fresh-tasting, only lightly smoked, pleasingly creamy without being too wet and served with Captain's Wafers, it at least flutters on the fringes of the tastes I classify as "orgasmic" (it's no foie gras or stone crab...but it's damn fine nonetheless).  By the way...does anyone actually enjoy the ubiquitous Saltine offerings provided elsewhere on the beach?  Show some class and give me Captain's Wafers with my smoked fish spread, dammit!

Sorry for the cracker digression.  UD, who doesn't ordinarily care for smoked seafood, snorted it like crack. 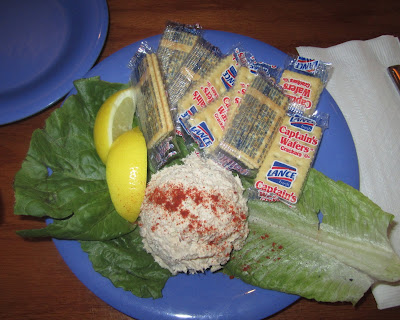 Having been only recently introduced to the grouper delicacy known as the cheek (literally taken from the sides of the head), Underdog was eager to try a beer-battered skewer of these sweet, tender morsels.  The sight of his eyes rolling back in his head told me all I needed to know.  There was some kind of "special sauce" as well...sort of a tartar, thousand island and remoulade morph as far as my taste buds could discern. 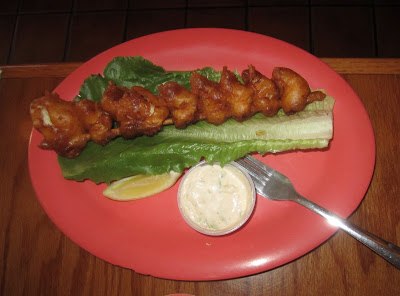 I ordered a Grouper Reuben (grilled grouper, swiss cheese, sauerkraut and thousand island dressing on toasted marble rye).  Not really being a sauerkraut kinda gurl, I asked our server to sub coleslaw and she sweetly complied.  It was a really good pub sandwich. Grouper at Frenchy's always tastes like it was swimming mere hours ago and today was no exception. 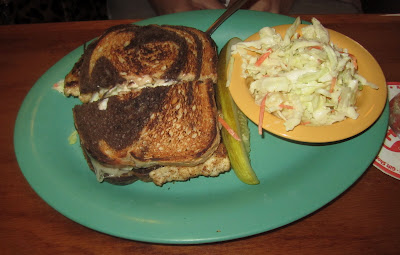 My better half was already pretty full at this point, so he opted for two Baja Fish Tacos (@ 2 for $5.75) and yet again I was forced to ponder the vague, ambiguous (yes, I guess that's redundant) menu description of "fish".  Is it catfish?  Cod?  Tilapia?  Minnows?  He, however, seemed enjoy the tacos despite his ignorance of genus and species (even if they weren't as photogenic as they could've been). 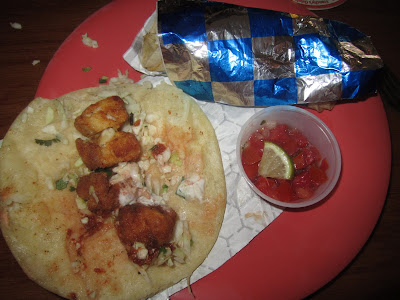 All of this plus a frosty pitcher of Bud Light set us back around $40 before tip.  I challenge you to find fresher and more affordable seafood pub-grub anywhere on the Pinellas beaches...not to mention friendlier service.  Sometimes I love it when things don't change.

Posted by Denise Parker at 7:37 PM

Email ThisBlogThis!Share to TwitterShare to FacebookShare to Pinterest
Labels: Seafood